Thank you for your prayers!

Although it was a short trip, my trip to Mongolia this time was full of wonderful experiences.

I would like to report on my trip reflecting on my activities. More pictures will be posted on Facebook so please let me know if you are not Facebook friends with me yet.

I met with the Aoyagis (Members of Christ's Glory Church, a couple whose mission is to encourage all those serving the Lord) at Seoul Inchon Airport and we flew to Ulaanbataar together. Since the Aoyagis had a super busy schedule, I worried if they could come, but thanks to the Lord they were able to come! They sensed the Lord's leading! The 3 of us boarded the same flight, and after 3 and a half hours, around 10pm, we arrived safely at Chinggis Khaan International Airport . Regardless of our late flight, all the leaders of the church had come to greet us and I was touched! We stayed at a guesthouse operated by a Korean Christian. The temperature in Ulaanbataar was already around 3 degrees C (37F) and cold, so we had to dress up for the winter temperature.

The guesthouse serves us Korean breakfast, and we started our day with Korean “Gim” (seaweed). I met with the leaders from the Lord's Glory Church for our first meeting from 9 am. I shared what has been happening in Japan and the US, showing the website Home Page which was well developed in 6 months. And the local staff reported on the activities in Mongolia. Our project direction was slightly changed, and we decided to focus on “The children of the Manhole Children.” The Manhole children, who are still teenagers or in their 20s, are having babies in inadequate environment, and we decided to have a 24 hour “Child Care” facility to take in these children. The system would work so that the children can go back to their parents from Friday night and during the weekend, and if they did not have parents, the children would just stay there. We anticipate that it would be difficult for the parents to come pick up their children every weekend since their residing area is far from our home. There is a possibility of the parents leaving their children if we do not help them with transportation. We foresaw the great need for a vehicle to take the children to/from.

<Visit to the Facility>

The site proposed for the facility is about 6 km (3.7 miles) from the city center of Ulaanbaatar. A wonderful couple named Mr. and Mrs. Chukka, who owns a land enough for 3 generations to live on, kindly let us use a building that they were not using. The lease terms were great, and they would lend it to us for free the first year, and we could decide whether to lease it or buy it in the 2nd year. When we first looked inside the building, it was pretty shocking; the walls were torn, the flooring were rippled, there were uncovered bricks, an unprotected fireplace, furniture with sharp edges, and obvious danger for having children around. We knew right away a lot of renovation and repairs need to be done. The 2 rooms were about 6 tatamis (106 sq. ft.) and 8 tatamis (142 sq. ft.). The Chukkas liked living a simple life, and the land had plenty of trees. Some of the trees produced fruits during the different seasons, and they said they would share their life in the nature with the kids. I was just grateful for them to open up their land and house to the manhole children, but when I heard their way of living and their understanding of our project, I was very impressed. Mr. Chukka speaks English well, and is intellectual who used to work at the Ministry of Foreign Affairs. I was touched to see that God sent such wonderful people for our project.

There was big celebration for an ordination ceremony for 3 people that night. About 90 people attended wearing their formal clothes, there were many Korean missionaries in the event, too. The ceremony was deeply moving. Pastor David Namsrai, one of those ordained, is the head leader for the “Mongolia Kids’ Home” Project, and this was the perfect timing for him to be ordained right before our project launched. Pastor Namsrai said that he thinks about this project day and night, and I could see the passion in his eyes.

We visited Boldoo's tire repair shop. It is a small repair shop made up in a container vessel. Tomoko found Boldoo's bible on the greased table! I was over excited that a guy who couldn't read was saved and now reads so much of the bible! After I watched him do a good job at fixing the tire, we went together to his mother's yurt. His mom welcomed us and we had a good time of fellowship. His mother pointed to her chest and said “I believe Jesus Christ in my heart,” so I shared with her the importance of living according to the word, and to receive baptism as part of it and to receive the promised of the eternal life. Sadly, she told me that she wasn't ready to be baptized yet. It seems the time hasn't come yet. But I was delighted to hear Boldoo mention with a sad expression on his face, “I've been trying to tell mom the same thing, but she hasn't accepted it yet.” I felt the spirit working through both of us when I heard him sharing the gospel with his family!

One of the sisters at church invited us to a traditional Mongolian meal. The main meal uses lamb meat, and Mongolian custom is to use chopsticks and a knife at meal tables. When I asked how we cut up such a big chunk of meat, Pastor Gana cut it up into small pieces tactfully right before my eyes. He then cut off any remaining slices of meat from the bones. Mr.Aoyagi was excited to see the clean bone, and took a photo with the cleaned bone. LOL

<Preparation for the Opening Worship>

We left early for the 9 am Opening worship service. We stopped by the Onnuri Mission Center on our way to pick up the tables and the chairs and other things we needed. There I saw Dasha joining the worship. I was worried how he was these days since I heard he couldn't come to church recently, but I was delighted to see him at the Opening Worship. When I smiled at him, he shyly smiled back. I hugged him, but as usual, he just stood there shyly, and I thought to myself it was the same old Dasha. But he had a good smile on his face!

The dreary backyard was changed into a wonderful setting in a short period of time. We put up chairs, a banner, a table, and the tea setting had Japanese snacks brought by the Aoyagis, and the table was decorated with goodie bags for the kids, toothbrush sets, origami, and folded cranes.

We had worship songs, prayer, and explanation for the project, and the sermon was about “unless a kernel of wheat falls to the ground and dies.” After that we exchanged MOUs presented a memento plate, did a ribbon cut, appointed the staff, and introduced the children and prayed for them.

I was touched during the staff commission, and the staff members who understood the importance of their role responded to their calling with tears. Many of the attendees who were watching were also in tears! I could see the Lord's presence fill this opening service. One of the Mongolians who attended was a retired pastor, and he came to us and said that “Mongolians should be involved in this project!” and that “I will be that first one!” Then he offered a bill that was the largest bill in Mongolian currency. He also said “Right now, there is only one bill, but this is only the start. I will continue offering!”

Pastor Gana led the service and my heart burned with passion when I heard the powerful worship songs led by his younger brother Pastor Tsunde. I was given the opportunity to give the sermon and share my testimony. I shared how I started to get involved in the project. I also showed 2 pictures of Boldoo from the past, and wanted him to be filled with thanks with how his life has changed, but it seems it was a painful memory for him. Although I asked him a permission beforehand, he had a sad face when I showed these photos, and I felt very sorry. But when we had lunch together afterwards, he told me, “ Miss Eiko, I feel my life now is like a dream. I couldn't even imagine I can live this kind of life back then.” I told him half apologizingly that it was a blessing that even those pictures helped him recognize and appreciate how he has changed. 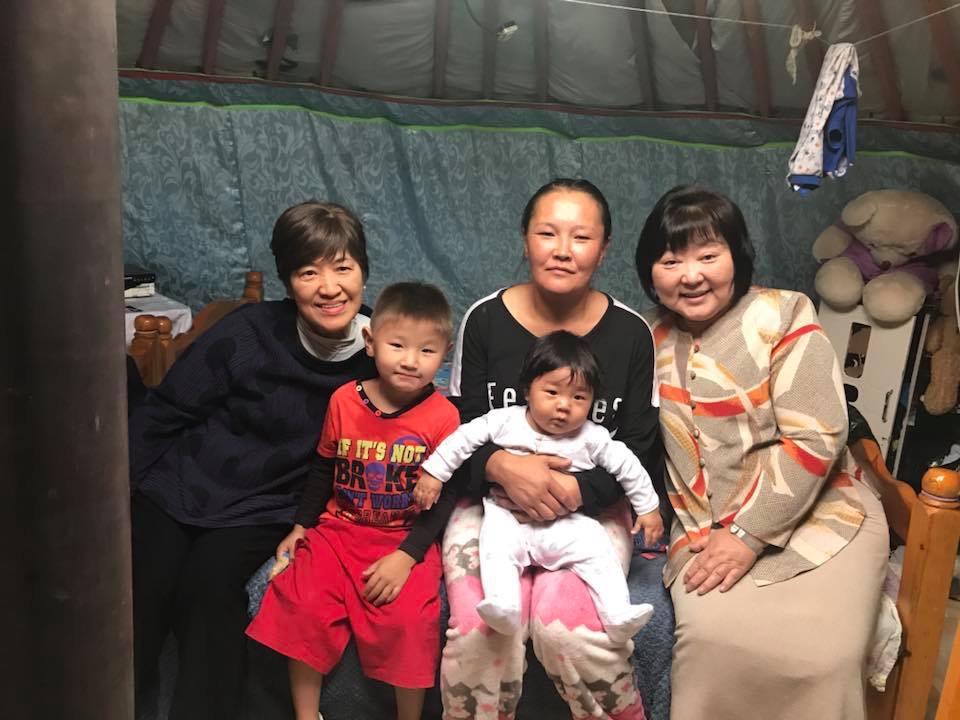 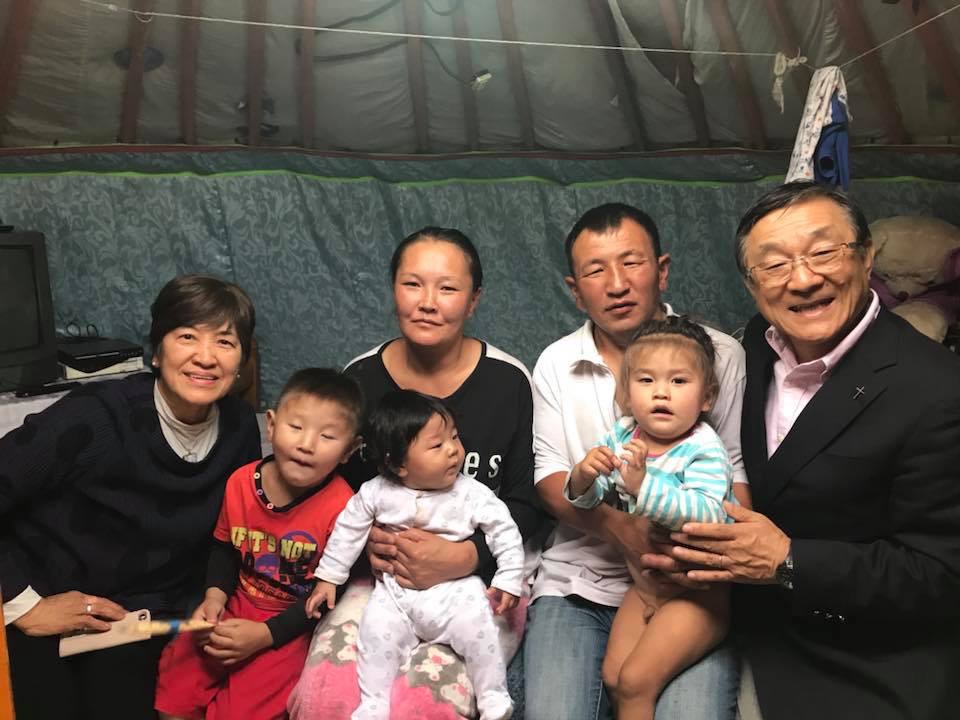 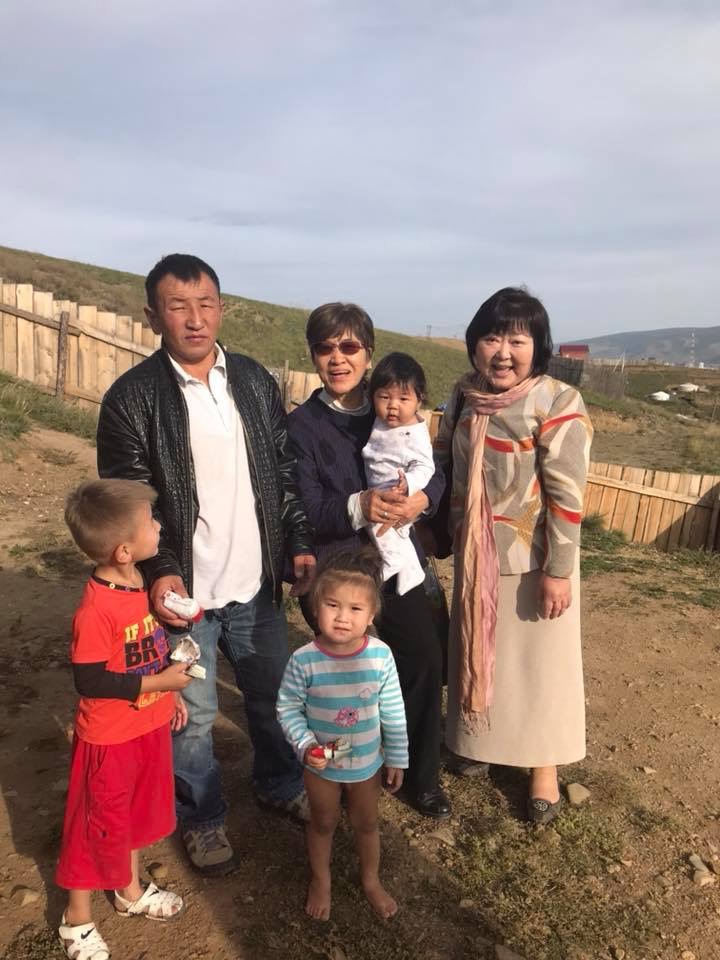 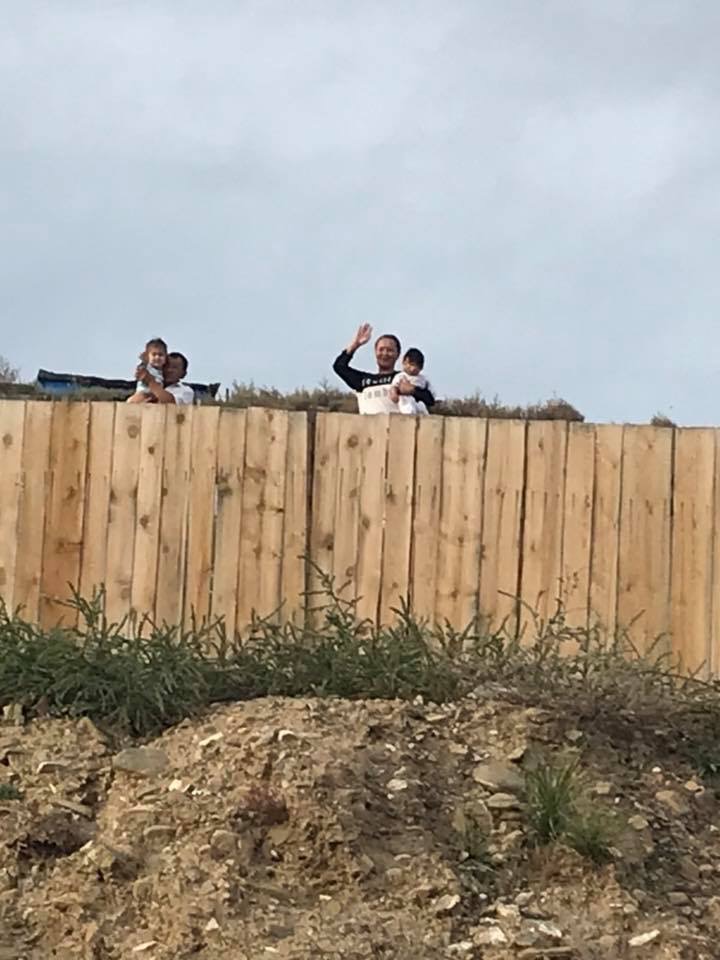 Dasha didn't seem so nervous this time, and he smiled at me sometimes. He even sat next to me and ate from the same plate. After our meal we visited Dasha's home. His kids looked well and were bigger, and they loved the bubbles kit that the Aoyagis brought.

The reason why Dasha couldn't come to church lately was because his garbage collection job ends around 5am on Sunday morning, and he has 3 kids including a 6 month old baby, and can't leave the house much. Of course, I understood that they didn't have a car, and it was difficult for them to come such a long distance. So I decided to give gas money to one of the church members so that he drive the Dasha’s family to/from their house. When Dasha's wife knew about this, she screamed “Oh that is wonderful! I really wanted to go to church.” The Aoyagis offered a gift of music, we all prayed prayers for blessing, took a picture and went home. They came to the end of the fence and waived their hands until we could not see each other.

Although it was a busy weekend, Pastor David Namsrai spoke passionately about this project and wanted to discuss the project direction. Since this was the most important part of my visit, I told him “As many hours as you want!” We then had a meeting with Solongo, who is a specialist for the Manhole Children, who gave training and seminars for this project.

We had great discussions and many hours passed by quickly! I think we were able to discuss well about the direction of this project.

I was delighted to see Pastor Namsrai wants to share this project and raise supporters in Mongolia itself!

It also made me happy when Pastor Gana suggested that the land next to the current house might be available for use for the “future 2nd and 3rd facility.” It seems like the vision for the future is expanding.

We had more discussions at the cafe while waiting for our midnight flight, and went to the airport around 9pm. To my surprised some of the leaders of the Lord's Glory Church were at the airport with their kids to say good bye to us! I was deeply touched by their love and passion, and kept waiving my hand until I could no longer see them. I could tell that the warmth of the Aoyagis had touched everyone we met!

Mostly I think it was only possible through the strong prayers of the over 500 prayer warriors we have!

We thank all of you who are part of Dream Together1000, from the bottom of our hearts!

Message from Nazu, a fourth grade student of elementary school